Once upon a time... George Merritt of Swansboro, NC decided Oriental needed a movie house. He purchased land at the corner of Broad and Church Streets from James and Ada Mason in 1946 and, sometime later, built the Mart Theatre, named after his new bride Margaret Jones. According to Billy Johnston, its original projectionist, the first film to be shown at the Mart Theatre was Blue Skies (1946).

In the summer of 1949, it was sold to Hubert, Thomas and W.J. Smith, Jr. They enlarged the balcony and projection room, added restrooms and got rid of the bats that found their way inside through holes in the buildings concrete block construction: Drawn by lights from the projector, the bats flew around the theater, enhancing the ambiance during scary movie scenes and creating an unwelcome distraction at other times.

By this time, electrical service had come to the outlying areas of Pamlico County and one switch across from the theater controlled all the street lights in Oriental. As a service to the town, Tom or Hubert turned the street lights on each evening before a show and off after locking the theater up at 11:00 p.m. 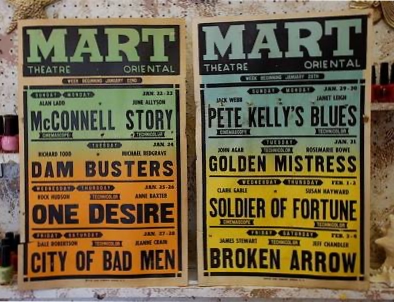 Movie posters from the Mart Theatre. Georgie Powell found them in the walls of her home, put there years ago hen her father, Red Lee, did some construction on the house. Based on the movie release dates, our guess is that the posters are from the mid-1950s. ~Photo: TownDock.net

Until it closed in the late 50s, the Mart Theatre attracted patrons from throughout Pamlico County, many of them using the then-existent train service for their journey. Lifelong residents remember paying 10¢ to see films in those days … and Jackpot Night:

“Each Tuesday night a ticket was drawn. If the person was present, they’d win the jackpot. If there was no winner, the pot would grow by $10 each week. If there were no winners for several weeks, so many people would show up on jackpot night that some could not get into the theater. Tom Smith recalled one man on the sidewalk outside the theater loudly claiming his winnings!”
~The Way It Was by Jim Ragan

The building languished until 1987 when the Pelican Players rented it for rehearsals, storage of props and costumes and construction of sets. Because it was unfit for public use, the Pelican Players performed at the Oriental Women’s Club building. In the meantime Clem Paffe, a resident of Oriental, would ride by the building and ponder the question, “wouldn’t it be nice if...” He asked around and found out there were other people with the same thought. Soon after a meeting of interested citizens was set up and the question rapidly became a reality.

The Pamlico County Civic and Cultural Center Project began in the early 1990s with a dream of creating a performing arts center within the county. On May 8, 1992 the Old Theater Corporation, a nonprofit organization, was formed to facilitate acquisition of the theater and assume responsibility for its renovation. Its first priority was to revive the dormant old building … a major undertaking that required a total renovation to bring the building up to modern specifications: its interior was completely gutted and refurbished to include professional lighting and sound systems, stage curtains, seating and much more.

“Since we could not afford to buy new seats at the time of renovation, volunteers brought the original Mart Theater seats to John Bond’s storage building. They removed dirt and paint (including 11 lbs. of chewing gum underneath), sanded and repainted them.”
~Evelyn Stephenson, Past President, Old Theater Corp.

This major undertaking climaxed when the Old Theater reopened to the public on March 15, 1995. In 2007, the addition a motorized movie screen and projection equipment returned the building to its original purpose, providing movie buffs the opportunity to view classic and new release films on a large screen … the way they were meant to be viewed. (The original arc light projectors were donated to Oriental’s History Museum by Billy Johnston and can still be seen there.) 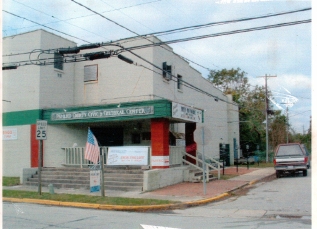 Over the years, the Old Theater has provided the stage for local theatrical groups, including Pelican Players and Oriental Repertory Company, and has been used for a wide variety of events including children’s programs and workshops, a variety of civic, business, club and charity events and professional performers who often say it’s a favorite venue. The intimate setting of the Old Theater provides an unforgettable audience experience and, with 159 seats, no one is more than 40 feet away from the stage.

The Old Theater Corporation continues to manage the facility with a controlling Board of Directors that is comprised of Pamlico County volunteers. Keeping this resource alive and strong requires the additional support and participation of individual contributors, community businesses and service organizations, public grants and folks who volunteer on stage and behind the scenes. Contact us TODAY for more information.

To read our Anniversary Commemorative Booklet, celebrating the Old Theater’s history and 70th anniversary, click here: Once Upon a Time.pdf